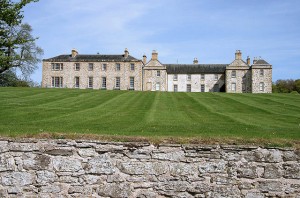 The Hirsel has been the Berwickshire home of the Earls of Home since the seventeenth century, when the accession of James VI of Scotland to the English throne meant that it was no longer necessary for the Border nobility to live in castles like Hume Castle, England being no longer a potentially hostile neighbour.

The site is thought once to have been the location for a religious foundation but, following the reformation in the sixteenth century, it became the property of the Kerrs, who sold it to the Earl of Home in 1611. Over the centuries the house was expanded in size, especially after the 11th Earl’s marriage to the Douglas heiress, before some reduction in size became necessary to adapt to the altered requirements of the twentieth century. It remains nevertheless a fine example of a substantial Border country house and as the Scottish seat of the Clan Chief has seen members of the Clan gather on several occasions.

The grounds are particularly fine, with many magnificent trees and a substantial lake. The displays of daffodils in the grounds in the Spring are especially beautiful. The grounds are open to the public throughout the year.