The 2013 Gathering of the Clan Home took place over the period 6th-9th September. It was a great success, with over 120 attending. Typical comments from attendees were ‘brilliant’ and ‘magnificent’. A particularly welcome feature of the event was the presence of large contingents from other countries around the world, including the United States and South Africa. Others came from Canada, New Zealand, Norway, the Netherlands, Finland among other places. Some wore their own (non-Scottish) national dress at times! 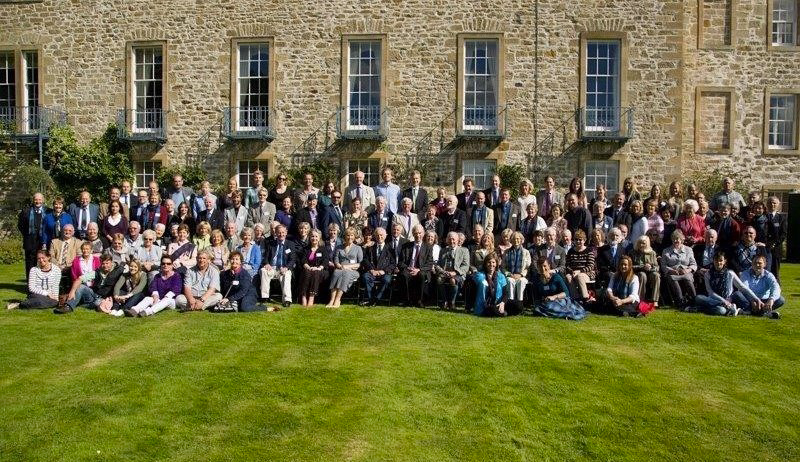 Friday 6th September
The Gathering began by meeting at the magnificent Wedderburn Castle.
Wedderburn is located outside Duns, Berwickshire, and had been taken by the Association for the week-end. The property belongs to David Home Miller, one of the Homes of Wedderburn. 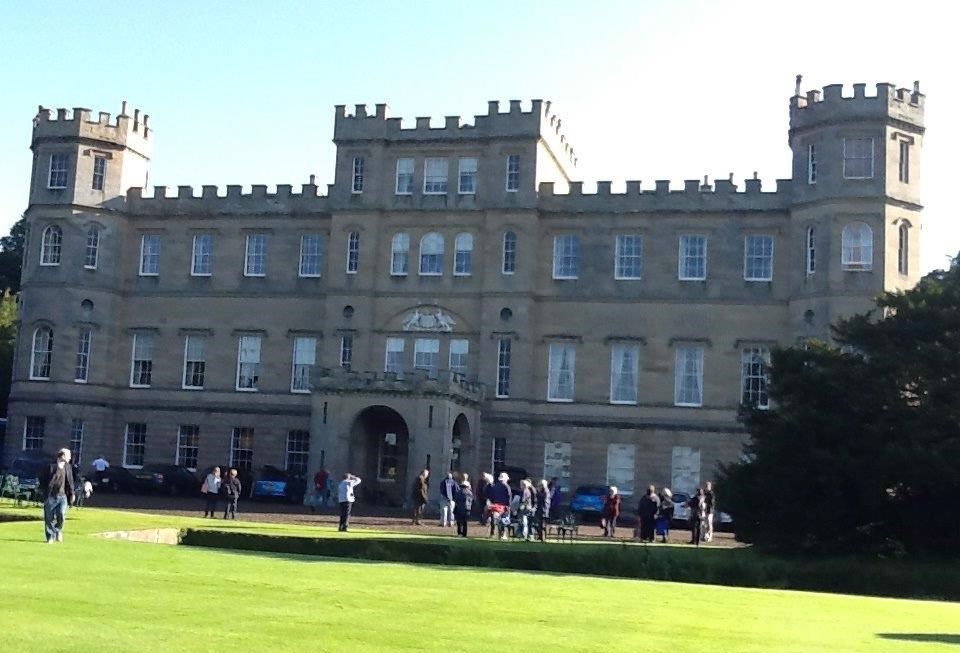 Geneology
A genealogical session in the dining room was attended by a large number of members of the clan keen to explore their ancestry. Presentations were given by Jim Hume from Missouri, USA over Skype, (a first for us using modern visual communications to reach out across the world), from Penny Denby and Ian Maitland Hume all adding to both our knowledge of the clan’s history and methods by which it can be researched.
A number of people had brought their own family trees to discuss. This is a clear area of interest for the Clan and we are exploring ways to facilitate and assist with this across an international landscape.
Jim Hume (USA) and Penny Denby (UK) receive emails sent to familytree@clan-home.org.
An informal dinner in the dining room and kitchen followed the workshop with nearly a hundred people present. We took the opportunity to start getting to know those members of the clan we did not already know, with some renewing acquaintances from previous events.
Saturday 7th September
The morning saw clan members meet at Wedderburn for a coach tour of areas of Berwickshire associated with the clan, travelling through the beautiful country-side of the Merse.
The Gathering Dinner
The evening saw us gather for drinks in the drawing room at Wedderburn Castle before being piped in to dinner by Gunner Beveridge from the Scottish Gunners (19th Regiment RA).
Attendance at this gathering was beyond our initial expectations and we tested the maximum capacity of Wedderburn Castle having to occupy two rooms for the dinner. 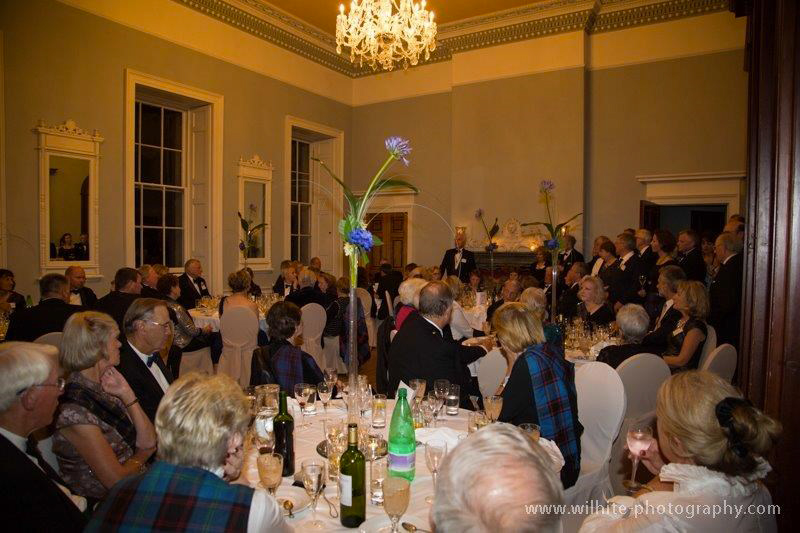 We dined in both the ballroom and morning room, these being enhanced with beautiful flower arrangements by Rosemary Maitland Hume.
This was a great occasion – everyone had dressed for the occasion and there were splashes of the Clan Tar-tan throughout.
Following the dinner we had a few words from our Chief, the Earl of Home and the Convenor, and once the ballroom had been cleared, we had the opportunity to regale ourselves with some Scottish dancing to music from Geordie Douglas Hamilton’s band.
Sunday 8th September
Sunday morning saw the Gathering move to the Hirsel, the home of our Clan Chief, where we were greeted by music from Bombardier Ballantyne, also from the Scottish Gunners. 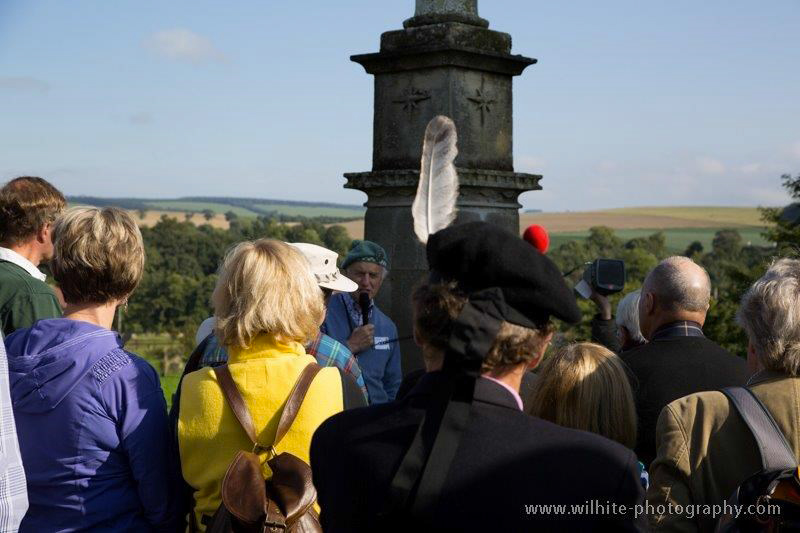 The meeting agreed to the election of Gospatric Home as Convenor in place of Ian Maitland Hume, who wished to stand down after ten years in the post. Ian Maitland Hume and Brigadier Dick Hume were elected Honorary Vice Presidents in recognition of their contribution to the Association. Both were warmly thanked for their great contribution to the Association, as was the former Secretary, Stephen Hume.
The rest of the Council were re-elected to office.
The meeting then had a lively discussion on the subject of wind-farms in the proximity of Hume Castle before adjourning for lunch.
The weather was magnificent and to our surprise as we wandered around the lawn the Coldstream Pipe band came marching around the corner of the building in full formation. We were then treated to a marvelous display by The Coldstream Pipe Band at The Hirsel. 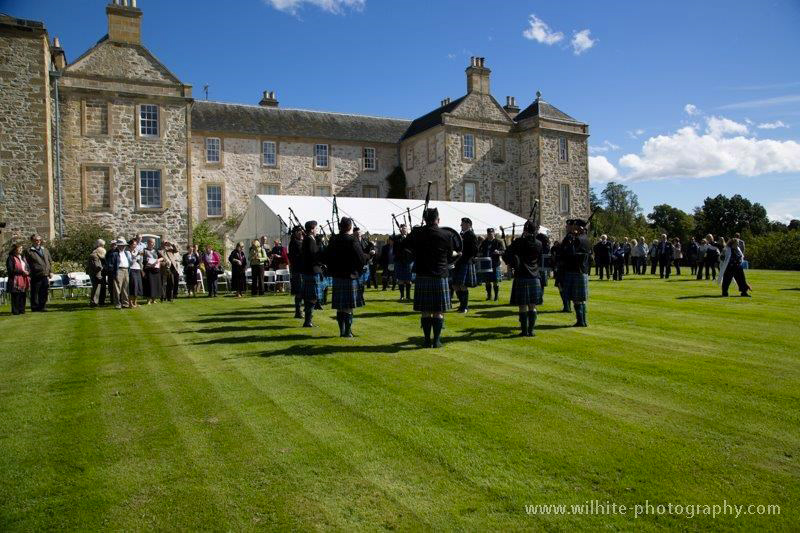 This was followed by the official gathering photo which was, due to numbers, a little more difficult to manage than has been at previous gatherings. A short clip of the band can be seen on the following link.
www.youtube.com/watch?v=zJVJLQZutnY
In the afternoon we moved on to Hume Castle to raise the Home banner and to celebrate our return to the ancestral home. We were piped up to the Castle by Gunner Beveridge and joined by a number of distinguished guests from the Borders including the Lord Lieutenant.
The assembled throng were then splendidly entertained by a combination of readings from Home/Hume authors, including one by the Chief from a book by his father, the former Prime Minister, interspersed with songs by the brilliant Scottish singer Isla St Clair.
Those who still had an appetite after lunch were able to enjoy a cream tea. We all enjoyed the sensational views. See the 360 degree views.
Once tea was over, interest moved to the church at Gavinton, where we were the guests of the Reverend Ann Inglis. An ecumenical service was led by Father Adrian Convery from the monastery of Ampleforth (where the late Cardinal Hume was a monk). This service, on the eve of the 500th anniversary of the battle, recalled the memory of the fallen at Flodden and culminated with Isla St Clair singing the beautiful anthem The Flowers of the Forest – also known as ‘The Lament’ – written specially in memory of the Scots who died at Flodden Field in 1513. Isla’s song was taken up by Bombardier Ballantyne who marched slowly into the Church as he played.
The moment was deeply moving and completely unforgettable. It is a measure of how privileged we were on this occasion that Isla sang this anthem again the following day at the memorial service in St Giles’s Cathedral in Edinburgh attended by forty clan chiefs of Scotland.
We then returned to Wedderburn for dinner. Again we had the pleasure of some music from the Scottish Gunners and had the opportunity to dance. We even had an opportunity to learn some steps of the Highland Fling, taught by an expert!
Monday 9th September
Monday morning saw the clan move to Flodden Field to commemorate the 500th anniversary of the Battle in which 10,000 Scots and 4,000 English are thought to have died.
The Chief led us up to the Memorial Cross and laid a wreath. After a minute’s silence, Bombardier Ballantyne played The Flowers of the Forest. 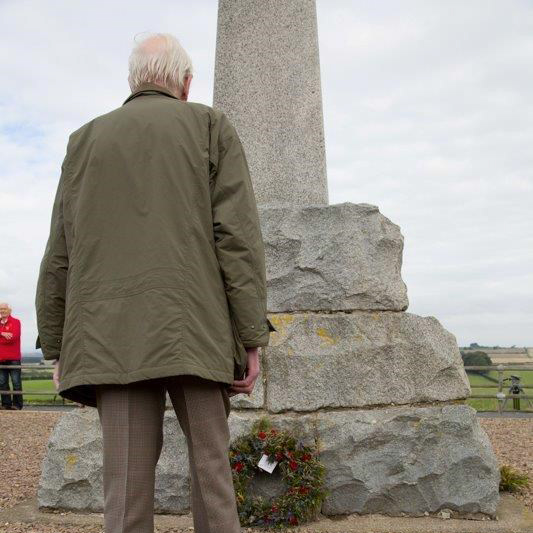 Bombardier Ballantyne with Lord Home and members of the clan at the Memorial Cross – Flodden Field Wreath laid by Lord Home at the Memorial Cross created especially in memory of the fallen created by Rosemary Maitland Hume with assistance from other clan members.
Below is a clink to a clip of Bombardier Ballantyne playing Flowers of the Forest at the Flodden Memorial www.youtube.com/watch?v=SifqqGWnrvM
This was then followed by an excellent talk by the leading expert on the battle, Clive Hallam Baker, who explained that the disaster for the Scots occurred as a result of a combination of factors whereby the Scots army, seeking to avoid being cut off by the English approaching from the rear, found themselves fighting on boggy terrain which was completely unsuitable for the pikes with which they were armed. The English, armed with less advanced but much more wieldy billhooks, were able to inflict enormous slaughter.
BBC TV covered our participation at the Memorial on national television.
The Gathering ended with this event, though quite a few of us met up in Allanton for lunch before departing for our various homes spread around the world.
We look forward to the next Gathering!

These photos are by kind permission of Kim Wilhite. You can purchase these and many more from the 2013 Gathering by visiting: http://www.wilhite-photography.com/Events/Clan-Home-2013/ 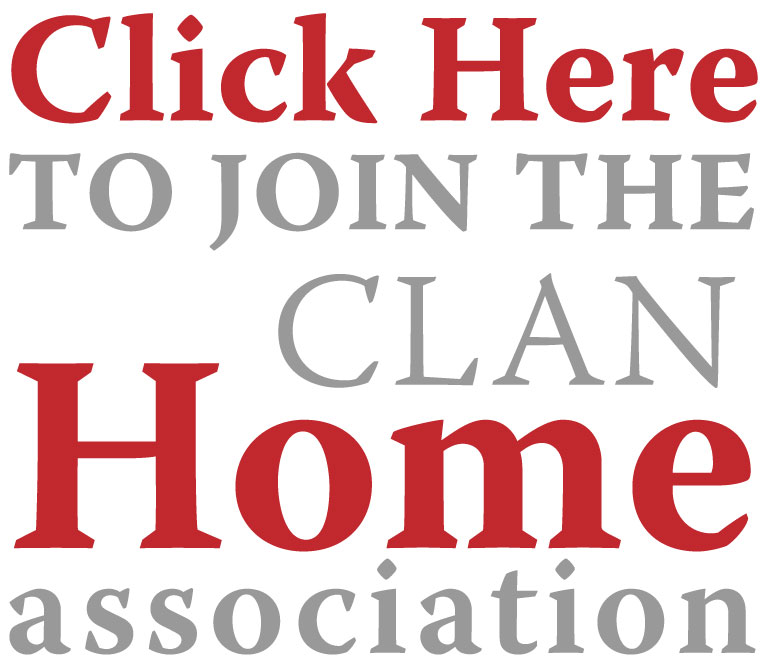